Jason Farmer aka “Farm Dawg” is goin to Japan with us y’all! Say hi everybody! HJR

Jason Farmer aka “Farm Dawg” is goin to Japan with us y’all! Say hi everybody!

Japan here we come…AGAIN! We can’t wait to get there! Love y’all God bless HJR

Japan here we come…AGAIN! We can’t wait to get there! Love y’all God bless

On our way to Hawaii! All work no play! It’s all good though cause it’s what we…

On our way to Hawaii! All work no play! It’s all good though cause it’s what we love to do! God bless everyone and we love y’all.

Many fans thought Los Lonely Boys were a lucky band right out of the gate, and they were right. Henry, JoJo and Ringo, the Garza brothers from San Angelo, grew up playing music with their father and had a massive hit their first time out of the gate with “Heaven,” a soulful ballad crystallizing their “Texican rock and roll” sound that cracked the Billboard Top 20 in 2004. It charted even higher in more specialized formats.
Although the Garzas never quite reached such lofty chart heights on their subsequent releases, their power-trio structure recalled past greats like Cream, the Jimi Hendrix Experience and of course Stevie Ray Vaughan & Double Trouble, so they quickly won a loyal following among guitar geeks with a taste for Texas blues, a sizable fan base they retain to this day (especially in the Southwest). At the same time, playing up their Latin roots placed them as natural heirs to the Santana/Los Lobos tradition, a style that truly blossomed on 2011 album Rockpango!

But Los Lonely Boys didn’t have a clue just how lucky they were until one night last February in Downey, Calif.

According to bassist/singer Jojo Garza, the band had just played a show at the Downey Theatre and was greeting fans when he heard a sudden, mysterious thud. In his rush to connect with his audience, guitarist/singer Henry Garza had not noticed the open orchestra pit and fallen several feet to the theater floor.

“I thought a speaker had fallen from the ceiling or something,” Jojo says. “I start talking about it too much [and] I start getting into it; I start having flashbacks, man.”

Henry sustained serious injuries, particularly to his back, that have required months of rehabilitation and limited his ability to work on Los Lonely Boys’ new album, Revelation (released today). Jojo says being so close to his brother’s accident and being unable to help him was “horrific,” but the band is drawing strength from Henry’s recovery.
“Man, we’re just happy to have him now,” he says. “He’s doing a lot better. He’s slowly building up the muscles, getting stronger. It’s just a blessing to have my brother alive.”

Henry’s injury did make finishing Revelation a little tricky, Jojo admits. He says the band had finished a good bit of the record before the fall, and that he and drummer/singer Ringo finished what parts they could while Henry was recovering, and Henry would add as much as he was able when he was able to muster the strength.

“But thank God we got it done over a period of time,” says Jojo. “It was some good spurts and bad spurts, but but we took advantage of the times he was feeling really strong and got in to finish it up. We’re really lucky that we got it done.”

Three songs came entirely after Henry’s fall, Jojo notes: “Give a Little More,” a plea to remember the important things in life set to a confident reggae-rock groove (one lyric is “If your brother falls down/ You’ve got to lend a helping hand”); “Familia,” an acoustic-based statement of solidarity; and “Dream Away,” which couples an always-stay-positive message to some nifty fretwork from Henry. Throw in a couple of potential mainstream singles, “There’s Always Tomorrow” and “Can’t Slow Down,” and arguably the hardest-rocking song in their entire catalog (“Rule the World”), and Revelation is scarcely the work of a band that peaked too soon.

But it is definitely the work of a group that knows it has crafted a distinctive sound and continues to refine it. Having mentors like Santana, Los Lobos and Willie Nelson to call on for advice on whether their songs fit that “Los Lonely Boys sound” doesn’t hurt, but the Garzas have been at this long enough they’re also pretty confident keeping their own counsel. Revelation is the second album to be released on their own LonelyTone imprint, which is distributed by Austin’s Playing In Traffic.
Not that they necessarily want to stop there.

“Well, you know, there’s always the hope to get another song on the radio and TV, and get it noticed by a LOT of fans,” the bassist admits. “But man, the real, honest truth is that we focus on the music itself, and I think the rest of it works itself out.”

The countdown to Revelation has finally come to an end! To thank all of our amaz…

The countdown to Revelation has finally come to an end! To thank all of our amazing fans who have counted down with us, we are giving away an amazing prize! Take a picture of you with your new Revelation CD and email it to us and you will be put into a drawing to win 2 free tickets to a city of your choice on the tour! If you bought your CD through iTunes, take a picture of you and your computer with the CD up! Please email your pictures to [email protected] You will have until 4 PM CST tomorrow to send in your pics! Travel expenses will not be provided, only the tickets.

Just as Los Lonely Boys were finishing a concert at the Downey Civic Theatre near Los Angeles last February, guitarist Henry Garza ran forward to touch fans’ hands and wound up soaring off the stage. Unaware of an orchestra pit between the stage and the audience, Mr. Garza landed on his face and chest—fracturing his neck and injuring his spine.

“Not realizing there was a gap actually saved me from worse injury,” said Mr. Garza, 35. “My body was limber and absorbed the hit. The lights were bright and all I could see were people excited in the front row. I thought the stage went right up to them.”

Now mostly healed, Mr. Garza and his two song-writing and singing brothers—bassist JoJo, 33, and drummer Ringo, 32—will begin a four-month tour on Jan. 24 in support of their new CD, “Revelation,” due Tuesday. “Acupuncture helped, but I don’t think I’ll ever be completely the same—I still can’t stay in one place too long,” he said. “But I’m ready to rock.”

“Revelation,” the trio’s eighth studio album, comes 10 years after their 2004 single “Heaven,” which reached No. 16 on Billboard’s pop chart and helped the band win a Grammy in 2005. Later that year, they recorded their “I Don’t Wanna Lose Your Love” with Carlos Santana on his album “All That I Am.”

The brothers formed a band in Texas in 1989, uniting roadhouse rock with adult pop, jukebox R&B, country and the conjunto music popular in South Texas—a style-hopping eclecticism that continues to define their success today. Original songs on their new album range from the Bruce Springsteen-influenced “Blame It On Love” and the soul-soaked “So Sensual” to the acid-funk of “Give a Little More,” the metal-wailer “Rule the World” and the Mexabilly “Dream Away.”

“Our Texican roots run deep, bro, but we’re really power rock-and-rollers,” said JoJo. “We grew up around jukeboxes so we know why hit songs work. But we aren’t content doing one thing or fitting a stereotype. Audiences love that our style is mixed and shifts from song to song.”

Born in Snyder, Texas and raised in San Angelo, the Garza brothers were taught to play by their musician father, Ringo Sr. “Dad has always been intrigued by Elvis and the Beatles—his dream back then was to play rockabilly and country,” said JoJo. “In the ’70s, he took his guitar and drove to Nashville in his hot rod, but that didn’t work out. He came back and rejoined his eight brothers in their conjunto band, the Falcones.”

In 1991, Ringo Sr. headed off to Nashville again—this time taking his three sons. “Dad packed us into the station wagon—we were like the Beverly Hillbillies,” said JoJo. “In Nashville, we worked hard every night at every dive—playing originals and whatever people wanted to hear.”

In 1996, the Garza brothers went out on their own, playing clubs across the Southwest. “Ringo had come up with our name years earlier—Los Lonely Boys,” said JoJo. “We wanted to pay homage to my dad, who had written a song for us called ‘Lonely Boy.’ ”

Albums followed, with a do-it-yourself garage feel. But for “Revelation,” the band made the business decision to work with top songwriters, to give their material a lift. “JoJo did some writing sessions in Los Angeles with Matthew Gerrard and others, and I wrote in Nashville with Radney Foster,” said Henry. “Radney is from Texas—he’s recorded great albums and works often with songwriters.” During their sessions, Mr. Foster took out a guitar and mandolin and asked Henry to play the songs he was working on. Then they moved slowly through them, sharpening the stories and polishing the rough edges. “On ‘It’s Just My Heart Talkin’,’ JoJo and Ringo had started a melody years ago but we never finished it,” Henry said. “Radney could hear how the story should be painted and the music strengthened.”

Conjunto touches appear lightly on the album. “Music for us is about diversifying and zipping ourselves up in different experiences to let people know we’re all the same,” said Henry. “It’s the musical burrito theory: We fill the tortilla with Fats Domino, Carlos Santana, Willie Nelson, bluegrass and other flavors. It’s all good.” 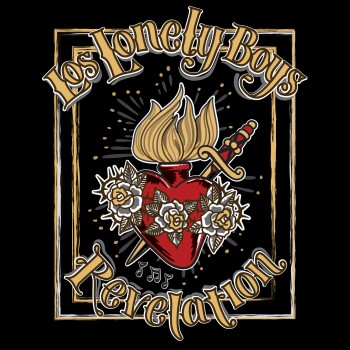 January 21, 2014Revelation, Songsloophole
BUY SONG
Oh
You’re on my mind now baby
I think of you all day
And in the night when I’m sleeping
Baby you’re in my dreams
I can’t stop thinkin’ bout ya
I want to buy you a ring
Yeah baby
No more wasting time without ya
Got to have you close to me