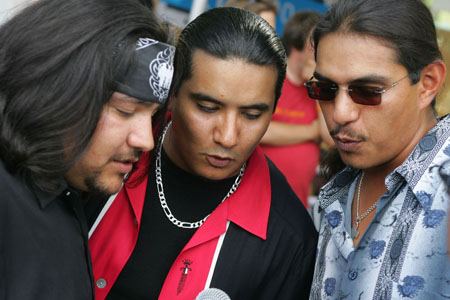 East of Eden, after Highway 87 splits from 71 in Brady, the face of the land changes. The Hill Country flattens into the farmlands of West Texas, fields suitable for growing cotton and other crops. To the west sits San Angelo, population 104,000, home to Los Lonely Boys.

Growing up in San Angelo, playing as children in the family-band tradition, the three brothers Garza have since grabbed music’s proverbial platinum ring on a breakneck carousel ride that began only four years ago. They styled their visceral fusion of blues rock into “Texican rock & roll,” cashing it in for a monster hit (“Heaven”) and Grammy for their eponymous 2004 debut album. Los Lonely Boys put San Angelo on the map.

Sacred followed for Epic in 2006, its rock-solid continuation of heart and form not quite overshadowing legal issues that marred the band’s family image yet were quickly resolved. They maintained a strong touring schedule and reaffirmed a commitment to Garza family values in the Hector Galán documentary Los Lonely Boys: Cottonfields and Crossroads. With a new album coyly titled Forgiven and an ironclad blood bond, Jojo, Henry, and Ringo continue doing what they’ve always done best: translating family into music.

“They are very popular,” says the older one confidently, smoothing an apron over her scrubslike uniform. When she turns to push the cart to the next room, the younger one’s face lights up. “I loooove Los Lonely Boys!” she mouths silently, pressing her small, ringed hand to the crucifix on her bony chest in a mock-swoon. A 30-ish waitress at Denny’s nearby can’t wait for the new album. “I buy them at Wal-Mart,” she volunteers.

That’s an audience Los Lonely Boys takes seriously; Wal-Mart’s version of Forgiven features two bonus tracks with political overtones, “There’s a War Tonight” and “Guero in the Barrio.” A stroll through a San Angelo Wal-Mart reveals the identical slice of Middle America found in any of the chain’s stores: a consumer’s paradise. That’s precisely where the Garzas want to be.

Not far from the three men who have nine children between them is a childhood colored by life on the road with father Enrique Garza Sr. The patriarch is a conjunto/country musician who kept the kids working partly out of tradition, as Abraham Quintanilla did with a young Selena in Los Dinos, and partly out of financial necessity.

“We saw the real stuff,” nods bassist and primary singer Jojo of the formative experience. “Bars and clubs and cantinas, people fighting, going into the bathroom and seeing people with needles in their arms. I was 7 or 8 years old in a bar in Nashville, and I could see the look of hatred on people’s faces: ‘Get those wetbacks off the stage, those little beaners.’ I’d look at my father like, ‘Why are they being like this?’ and he’d be like, ‘Watch this.’

“Then we’d kick off with Hank Williams’ ‘Your Cheatin’ Heart,’ and as soon as we’d come offstage, they’d be there saying, ‘You were great; we’re sorry.’

“The music did something. Music is life. Music is everything.”

Different but the Same

At Jojo’s house near the San Angelo Country Club, the Garzas tumble into overstuffed couches, three overgrown puppies trying their best to behave for company.

Ringo, so nicknamed for the Beatles’ drummer, bounces his knee and patiently drums with his fingers on the arm of the chair when the interview questions run long. Henry, the trio’s Vaughan/Santana-influenced guitarist, ruffles the hair of his son Nico as the boy wiggles down between the sofa cushions. Jojo the bassist sits on the edge and leans forward to gesticulate his point. They often step on one another’s sentences in an endearingly brotherly fashion.

Jojo is the talker. Henry speaks too, as does Ringo, but it’s Jojo who springs from the couch to illustrate an incident and is first to break into song. They’re all eager to weigh in on the new album, the upcoming Brotherhood Tour with Los Lobos, and a trip to New York to play The Tonight Show on July 8, but nothing gets them going like the mention of Forgiven producer Steve Jordan. A stadium roar erupts from all three siblings when reminded that Jordan’s recording tenure in Austin last January included watching the Giants win the Super Bowl.

“You had to go there!” Ringo shakes his head.

Henry slaps the cushion with a laugh. “We’re Cowboys fans. When it came to football, we had to tell Steve to stick to producing!”

“The final day of the session, we bought him a Tony Romo jersey!” exclaims Jojo.

The three dissolve into a cacophony of back-slapping and high-fives. In the mind’s eye, it’s easy to picture the Garzas as children at the dinner table, each scrapping for his share.

“Steve was like another one of us, a big kid, another brother,” offers Jojo.

“Another brother from another mother who knew the music,” nods Henry. “I don’t know if he goes by Jordan anymore. He’s officially one of the Brothers Garza.”

“I was very encouraged by their passion for the music and need to get things right,” says Jordan by phone from New York. “Not every decision was mine. They weren’t going to just roll over and settle for okay. They needed to understand the results to be sold on the way. We didn’t do anything in a conventional fashion.”

Henry puts it another way. “It was like a river flowing freely. It wasn’t something we were creating for the whole world. We were creating it for ourselves. When we hear it, we want to get goose bumps. We want to listen back and shed tears because of what we went through to get that song. That’s the true meaning of why we play music: We’re a family.

“In a way, we want to show people we’re not going anywhere. We’re who we’ve always been, and we’re gonna stay that way. Whether we write about the good lord, family, mamacita … “

“Different, but the same,” finishes Ringo.

Jojo leaps from the couch and breaks into song.

“You don’t need to stop believin’,

You got to live your life.

Hey, you know we need to come together.

We can make it right.”

“We always sing about love,” he finishes and rolls back on the couch. “But the song ‘There’s a War Tonight,’ that’s a different channel for us. There’s always a war is basically what it’s talking about.”

“Not that war, either,” Ringo points off to the distance. “The war is everywhere. In the neighborhoods. With parents. In school, too.”

“‘We can make it right’ pops up more than once.” Henry leans forward with palms open. “This is a real, very positive album.”

A xylophone banged on by one of the kids rings atonally through the house; Henry rises to go check it out. Two cell phones go off almost simultaneously; one uses the Ms. Pac-Man theme as a ringtone. Ringo locks his fingers and stretches them to crackling. Jojo wants to make one thing clear.

“We put blood, sweat, and tears in this album. We put our hearts and souls in it. We played our asses off.”